How my Bullet Journals help me cope

I´ve mentioned before (here, here, maybe even here, too), that I´m bullet journalling, I have my own SL Journal and I´d be royally fucked without it. So I thought I´d open my current one and show you my August spreads:

This is my August titler and Monthly “before pen” and the monthly “after pen”, meaning that I´ve added my personal symbols and notes what´s due on what date and stuffs. The balloon means it´s a birthday (bet you didn´t guess that, did you?), the triangle is an appointment and the little thing on the 17th is my symbol for our monthly StarWars Meetup (it´s even got its own name: Cantina Treff).

The next one is my mood tracker (yep I always write them down in English, the Details are put in German though, before and after pen. It helps me to keep track of stuff for my psychiatrist and my therapist.

Next up are the weeklies where I put the appointments and tasks at hand for the current week, along with a short teaser of the week to come – one before and one after pen. The crossed thingie is Dave´s Dungeons and Dragons group and the little pen are the missions for our StarWars IRC RPG called sw-empire.de. I´ve mentioned that one at length over the years, introducing my characters and all that. Yep, I´ve met him there, too. 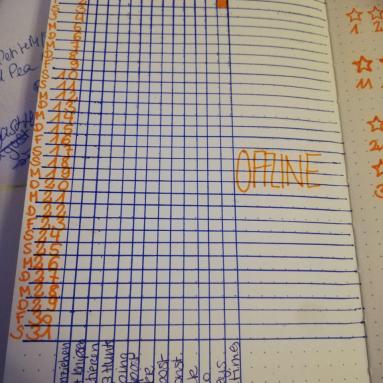 Now let´s get to my SL journal. I´ve had to start a new one for August – so excited!! I love new journals!
First of all you see my monthly tracker of tasks (if I changed outfits, unpacked stuff, went shopping)… before and after pen. In the second row you´ll see my “no spend tracker”. That worked better in the previous months *coughs*, well I cashed in to pay my rent on the 1st …and the cashins on the 2nd and 3rd were very minor.  I haven´t cashed in since though! YEY ME? Please? Come on!!! 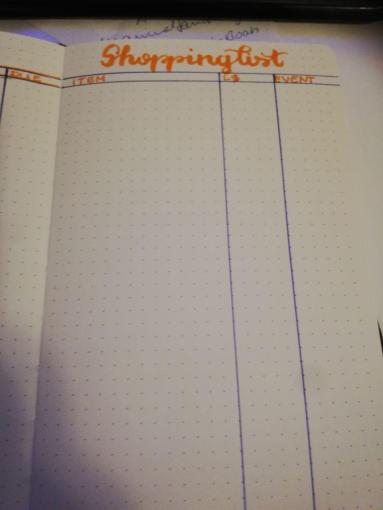 Now let´s get to the SL Lists – ToDo and shopping List, before and af…well you know^^

I don´t have weeklies for this month as Cilia is on holidays for most of August so I do have much less to track. Usually I track her releases, if and when I´ve shot them, if hunt stuff is due and when, events and the GG…

Now as you can see these journals are basically THE foundation for what little mental health I have left.  There´s tons of fancy and simple inspiration on FB, Pinterest and …other networks. This is only one method to do it, some use “planners” that are more like folders where you can exchange the pages and add your own and all that. The dotted paper isn´t needed either. Truth be told tough since I´ve started “journalling” I kinda refuse to use other paper as it´s just so handy to write and draw on. If you use facebook and are a pottymouth and guttermind like me I STRONGLY suggest the Inappropriate Bullet Journalling Inspirations Group.  It´s the most diverse and awesome group I´ve ever come across on the interwebs.

But now I´m hungry  so

Talk to me Cancel reply

This site uses Akismet to reduce spam. Learn how your comment data is processed.